Back to the Future Level Pack

Back to the Future Level Pack is LEGO set 71201-1. It has a score of 80. This is average compared to all other sets. The set is recommended by 0 reviews, based on 3 scored reviews and 7 reviews total. It is ranked in the bottom 46.24% scored sets on Brick Insights. We know this set was released in 2015, and it is categorised in Dimensions.

All prices are in $USD, adjusted for inflation. This set is compared to other sets categorised as Other. Read more about this in our article about price comparisons.

All prices are in $USD, adjusted for inflation. This set is compared to other sets categorised as Other. Read more about this in our article about price comparisons.

Is it worth the $30 that it's asking for. That depends but I believe it does. If you're purchasing it to use it in game, it's definitely worth it as it provides more play content much like a DLC but with physical items included. If you weren't able to get the DeLorean CUUSOO set, this is another chance to pick up the Marty McFly minifigure plus the Hoverboard which was omitted in the set.

When i first heard about dimensions, my first thought was: what themes are going to be in it? When I found out that there was going to be a back to the future theme in it, and that there were going to be 2 sets for it, I started pre ordering the sets immediately. Is it worth the $29.99? Lets see… First of, Marty Mcfly is pretty detailed, from his jacket to his are. his character is very fun in the game, especially with his guitar. this mini figure is great for people who didn't have time to pick up the cuusoo back to the future set when it was available. I LOVE the chibi style that the dimensions sets are in. And the delorean is one of my favourites! it looks pretty accurate to the movie, and the rebuilds are just as good. I sometimes use take the delorean of the stand and just roll it around. its one of the best dimensions cars! Th hover board has a new hold, which is a lot better than the purple skateboard they used in the cuusoo set, which makes this set a must have for BTTF fans. unfortunately, the stand is, pretty random, and is just there for the rebuilds. don't get me wrong, the rebuilds for the hover board are pretty solid, but the first build seems, a bit awkward. Now we have the in game level portion of the game, that this set unlocks, and it is, pretty disappointing actually. First you are in doc's apartment, which was pretty fun to play around in, then you have the strangely frustrating parking lot part, and then it goes to the barn, and then it skips half the movie to the clocktower scene. And , Thats it. Cut scene, unlock adventure world, and Boom! Buy another pack! After playing the simpsons level, doctor who level, and the portal level, the Back to The Future level seems, surprisingly short. They had 3 movies to take levels from, and they only use the first one, which is pretty disappointing, since I was looking forward to a BTTF 2 portion of the game. In conclusion, if you're looking for a great car to drive, character to be, and thing to ride, look no further than the Back To The Future Level Pack! but if you want a good back To the Future Lego game, well, just do the story mode one. I give this set, 7 gigawatts, out of 10

This score from LEGO is an aggregate of 14 reviewers. The snippet above represent only one of them.
Read reviews

Well, again a great set for the big Back to the Future fan in your life. Everyone loves a LEGO figure of a character they like and the mini-kit style DeLorean is an excellent design with two equally great alternates to build. A printed hoverboard is great fun for collectors and fans alike.

The Back to the Future Level Pack costs $30, which is a lot for a minifig and two small builds. If you're going to play the game though, the value increases substantially. I'm still not sure it's worth $30, even with the level being a lot of fun. If you're a Back to the Future fan or have to have all of the Dimensions figs I would recommend it, but if you're only casually interested I'd suggest waiting for it to go on sale. I do really like the mini DeLorean though.

It is a great shame that the gameplay lets down the physical content of this level pack. The DeLorean and hoverboard are two of my favourite models from the entire LEGO Dimensions range, but it is difficult to justify spending £29.99 or $29.99 on a level pack which offers less than half an hour of gameplay. 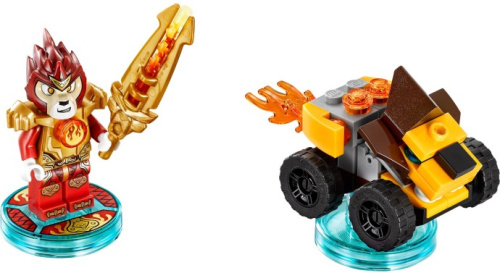